Scan the QR code below, or press to call us for your free estimate

Ultrasonic testing is a form of non-destructive testing (NDT) that uses volumetric measurements. Unlike conventional surface inspection methods, UT allows for the identification of flaws deep inside the material. An ultrasonic transducer sends high-frequency sound waves through the material. A graph depicts the ultrasound that reflects off defects in the material. The depth, scale, nature, and orientation of the detected indications can all be determined using ultrasonic testing. It is also possible to calculate the thickness of the material, such as the wall thickness of pipes. Industrial Welding Inspection has decades of experience using UT inspections in a variety of industries.

3) In most cases, only one surface must be available.

4) Scale, orientation, form, and type of defects are able to be determined.

5) Non-hazardous to nearby workers or activities

6) Equipment that is easily transported

7) It’s possible to use in an automated setup.

An ultrasound transducer attached to a diagnostic machine is passed over the object being examined in ultrasonic testing.
A couplant (such as oil) or water, as in immersion testing, separates the transducer from the test object. When using an Electromagnetic Acoustic Transducer (EMAT) for ultrasonic testing, however, couplant is not necessary.

The ultrasound waveform can be received in two ways: reflection and attenuation. The transducer performs both the sending and receiving of pulsed waves in reflection (or pulse-echo) mode, as the “sound” is reflected back to the system.

Reflected ultrasound is produced by an interface, such as the object’s back wall or a flaw within the object. The diagnostic machine shows these findings as a signal with an amplitude that represents the intensity of the reflection and a distance that represents the reflection’s arrival time. A transmitter sends ultrasound through one surface, and a separate receiver senses the volume that has reached it on another surface after passing through the medium in attenuation (or through-transmission) mode. The amount of sound transmitted is diminished by imperfections or other conditions in the space between the transmitter and receiver, exposing their existence. The couplant improves the process’ performance by reducing ultrasonic wave energy losses caused by separation between the surfaces. 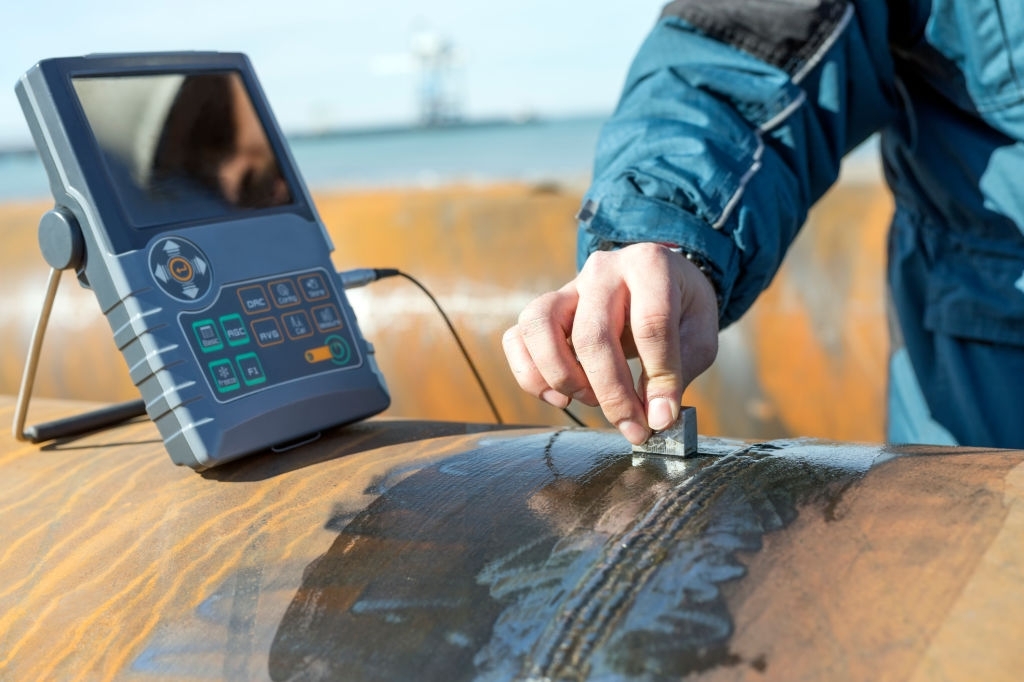