If you want a complete a welding project turnover report in Albuquerque, NM, there are plenty of things you need to keep in mind. We’re a professional service business that offers specialized weld inspection services to Albuquerque NM in the coal, oil, natural gas, and geothermal sectors as well as to other fields such as renewable energy, and the chemical industry. We’ve been in the inspection service for quite some time, and you can be assured that we will always do our very best for you. Every one of our onsite weld inspectors has the American Welding Society AWS CWI QC1 certification, and can do all tasks to qualify welders and document the project. Our activities have progressed, and as a result, we are able to provide quality service without breaking the bank. Our inspectors perform their duties carefully and diligently, so that the welding is certifiably correct and effective. 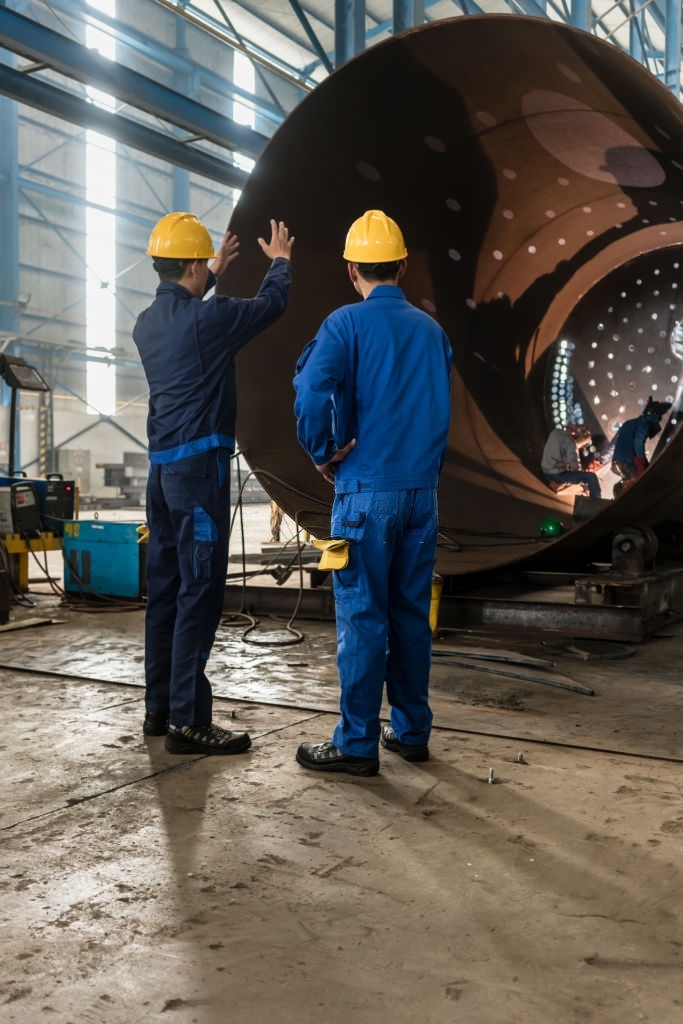 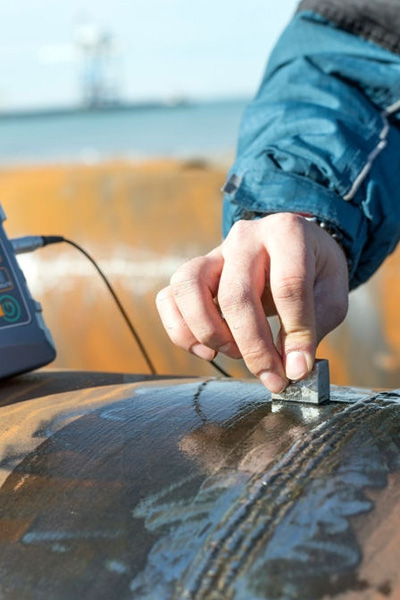 The welding process must be conducted in a suitable place; this is absolutely necessary because both position and consistency of the welding are critically important. Any anomalies are to be fixed, and they will be passed when they’re permitted by the code. Our job is to see that all projects have the documentation requirements to close the project, as well as to do our part in creating and maintaining it. If there are weld defects, we’ll identify them and record them for future reference, so our clients can properly handle the repairs. Our intent is to ensure that the welded part complies with relevant codes and jurisdictional requirements. We have been working in the welding and inspection trade for decades.

Our inspectors are highly qualified, as well as veteran professionals. We service the following: boiler, fuel, petroleum refining, metal production, chemical manufacturing, water treatment, pipe fabrication, structural steel buildings, power generation, and wastewater treatment facilities. We only use the most superior test methods to ensure your welds meet or exceed industry standards. Many of the additional specifications, including WPS, PQR, and WPQ will be accommodated.

It is critical to have the most up-to-to-date Welding inspection in Albuquerque because of several reasons.
Every project has a specific goal in mind, and our goal is to make each welding process effective and suitable for the task at hand.
Inspectors are engaged in the process of quality control, and hence their roles include participating in a rigorous investigation of the welds. The term “standard” refers to rules or regulations; “code” welding indicates that various manufacturing processes and procedures have been designated to ensure a desired outcome, thus welded in a methodical manner. As such, it is absolutely necessary to have a competent inspector assess the effectiveness of the weldment before, during and after it has been constructed. In some cases welds are NDE tested to verify that it was done correctly. If the weld fails, we will inform the customer immediately and help them fix the issue.

In the Albuquerque, NM area, we’re known for our experience with industrial and commercial projects. Therefore, you can trust us to select the best AWS-CWI QC1 inspectors for the job. On-site quality control process may be the part of the service you choose to have us perform. Our people are highly qualified and experienced within their discipline and expertise. To ensure that the welding inspection is of top level, we will use the best methods and tools available.  In any case, we have only competent CWI inspectors and NDT technicians to produce timely and accurate report documentation.

During the inspection, we’ll engage with the supervisors, managers, and welders to ensure that the consistency required is being met. Please contact us to assure your welding application is ideal and acceptable for your project today.  You may contact us toll free on the home page, click to call at the top, or scan the QR code below with your mobile device.

You need an on-site welding inspector if you have any construction welding and manufacturing projects that you want to be certified. In accordance with relevant welding codes, our NDT and highly qualified inspectors are certified by AWS as CWI QC1 and ASNT as SNT-TC-1A NDT Technicians. We’re certified to pass inspections and to ensure the task was done to code. Our professional experiences and expertise, are utilized to be able to evaluate whether or not the criteria and expectations are being carried out appropriately. Our technicians job includes consulting with general contractors, EPCs, Plant owners and more. We operate as 1st party, 2nd party, and 3rd party depending on the environment and interest to protect. For the NDT procedures, we may use one or a combination of the following methods: 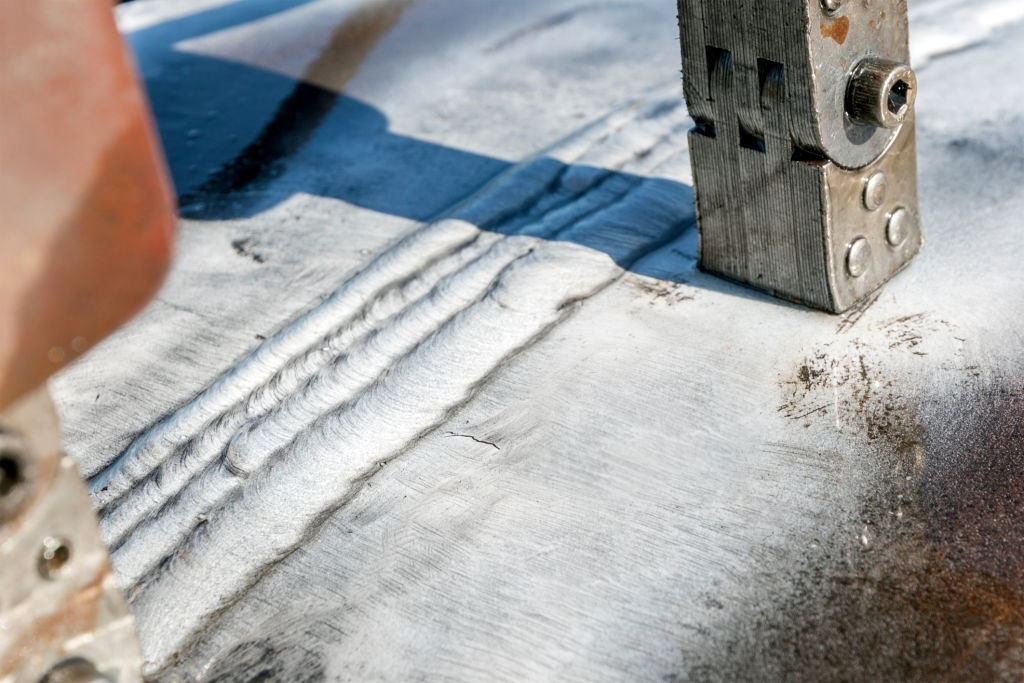 Our process of crack detection, using magnetic particle or MT, is utilized by our NDT team in Albuquerque, New Mexico.  This is useful for fine-scale crack testing on or below the surface of the base metal. Liquid penetrant or dye penetrant PT helps check surface discontinuities as well. Manufacturers are doing these inspections because it is needed to repair tanks, piping, and boilers in order to meet national code requirements. 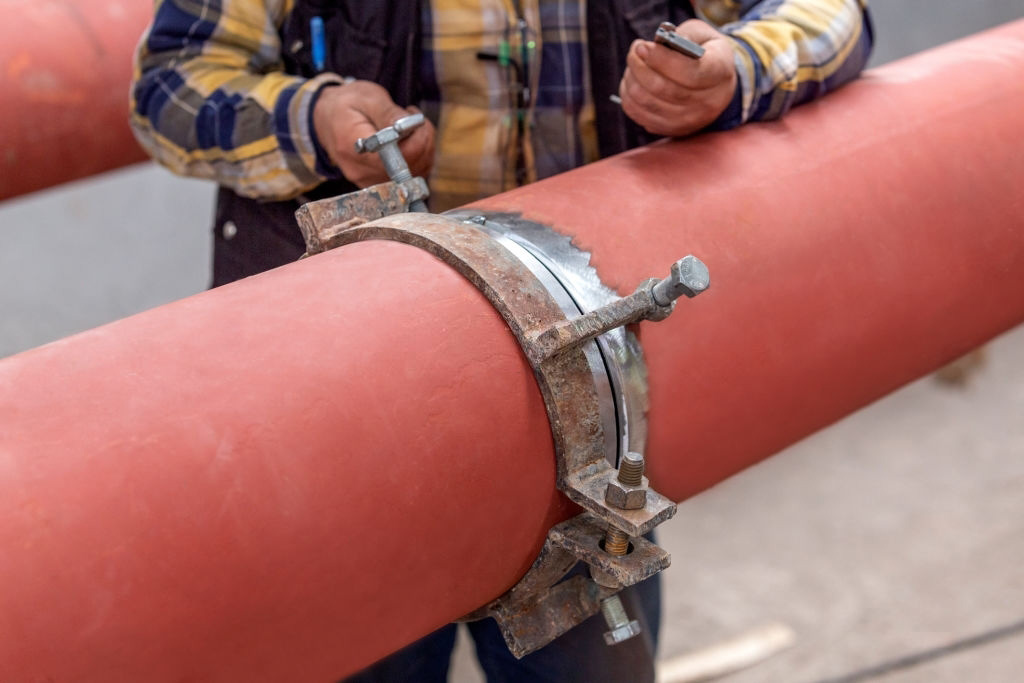 The most popular form of welding inspections, Visual Testing, is practically required on every project. Our expertise and experience allows us to look at the integrity of a weld using a variety of welding gauges. VT inspectors will look at the overall quality of the welds to determine if it satisfies the minimum code requirement specifications. It’s important to remember that the VT inspection might not be the only inspection required for your project. We provide a variety of other NDE techniques and testing. 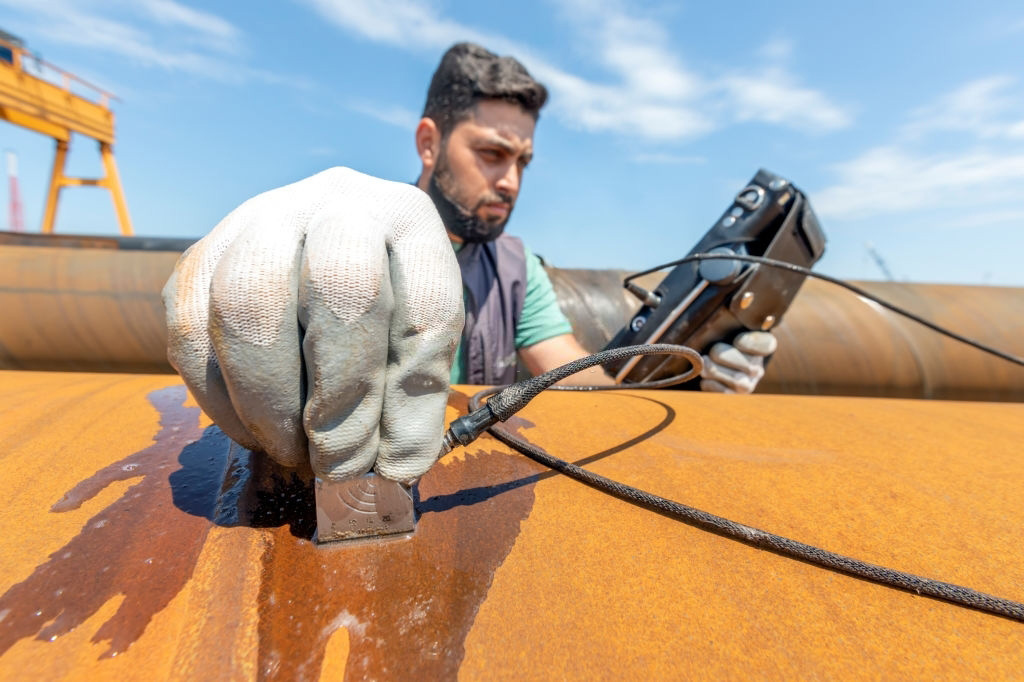 Radiography Testing and Ultrasonic Testing are the most preferred form of volumetric testing we offer. We have Ultrasound Testing (UT) and Radiographic Testing (RT) procedures that can be used to test the internal weld structure, and both methods are not damaging to the part. Our ASNT inspectors use these common NDE methods in an appropriate manner to provide you with a comprehensive and detailed weld report. 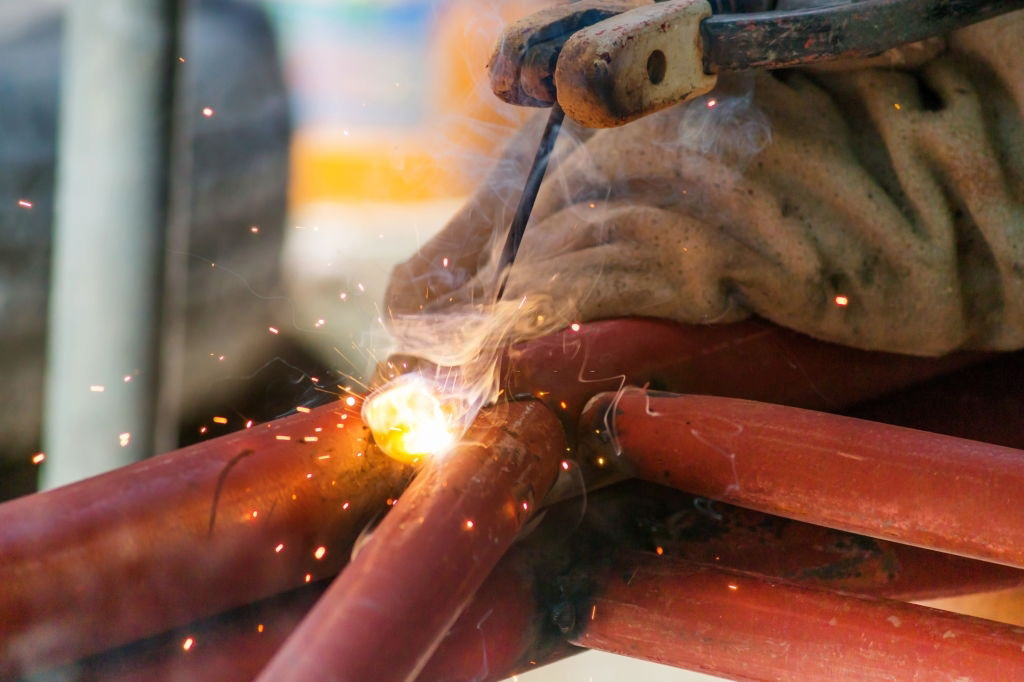 A destructive weld test is a prerequisite in order to certify that the Welding Procedure Specification (WPS) is valid. A bend test is used to show that the selected filler metal chemistry of a weld is acceptable to apply to a specific base metal chemistry. Bend testing weld coupons is also a way to qualify welders, and is a prerequisite for the qualification of a Procedure Qualification Record (PQR).

We’re all over the US, and we are here in Albuquerque, NM, to see that your project complies with code specifications. Thus, our weld inspectors will ensure that the welded component conforms to quality standards. CWI inspectors take nothing for granted and won’t allow someone to take the service’s value away. We will have a comprehensive analysis of all welding projects in Albuquerque and around the country. There are many ways we can help you ensure that your project’s welding is quality and sound. You can trust us to provide the information you need for project turnover documentation.

We are glad to have met the high quality welding inspection needs in the United States, and we are always ready to provide professional inspections. Whether or not you have already started welding and need to have it checked regularly as part of the process of repairing or maintaining your work. Our inspectors are trained to identify issues. They have experience, and they always find a way to the solution. Receive more information about how we can better assist you. Call us today!

The most populous city in the state of New Mexico is called Albuquerque. The city is sometimes referred to as "Duke City," since it was founded in 1706 by Nuevo México's first governor, the Duke of Alacazquez. Hispano was named after El Viceréstago de la Alacaminos in Cádiz, which in turn was an outsk for Villa Aleckmarina (such as Barelas, Corrales, Isleta Pueblo, Los Ranchos, and Sandia Pueblo). The city has long been situated on commercial and trade routes including the Santa Fe Railway (ATSF), Route 66, Interstate 40, and the Albuquerque Sunport. According to estimates, Albuquerque is the 32nd-largest U.S. city and the fourth in the Southwest. It has the population of the Albuquerque-area which was 915,927 residents in July 2018. The greater metropolitan Albuquerque area includes Rio Rancho, Bernalillo, Placitas, Zia Pueblo, Belen, and Lunas. This Albuquerque-Santa Fe-Las combined statistical area (CSA) includes 1,171,991 people in 2016. The CSA is the southernmost of the Rocky Mountain Front's major cities, including the cities of Cheyenne, Wyoming and Denver, Colorado, with a population of 5,467,633 in 2010. The city of Albuquerque serves as the county seat of Bernalillo County. The Rio Grande flows south to the Sandia Mountains to the Gulf of Mexico, and Petroglyphs is on the eastern side of the city. Albuquerque has a high altitude, ranging from 4,900 feet near the river to about in the foothills to 6,700 feet above sea level. The peak of civilization is found in an area of undeveloped land in the Albuquerque Open Space, where the terrain is 6,880 feet above sea level and rises to 10,678 feet at the Sandia Crest. The economy of Albuquerque is dependent on science, technology, trade, education, and the arts. Kland has its Air Force Base, Sandia Laboratories, and both the University of New Mexico and Central New Mexico have their main campuses in the city. Many high-tech facilities, including a Facebook data center in Los Lunas, are located in the city of Rio Grande Technologies, which is the center of the New Mexico Technology Corridor. the very birthplace of MITS and Microsoft While many film studios exist in the state of New Mexico, Netflix's production hub is located in Albuquerque. It's surrounded by numerous shopping malls and shopping centers, including Coronado, Nob Hill, and Winrock. The Downs resort and casino is located in the City of Albuquerque, and other casinos in the Sandia, Isleta, and Laguna resorts include the property including Route 66, as well. Balloon festival is held in the location called Balloon Fiesta Park, with its 47-acre landing field. Another large fair or event is held at Expo New Mexico, including the largest Pow-wow in North America, as well as the New Mexico State Fair. Other major venues of the metropolitan New Mexico also include the Popejoy Theatre, New Mexico's State University New Hall, and Isleta Amphitheater. These venues are located in Old Town, as well as next to the New Mexico Museum of History, Natural History and Science, and the Explora science and cultural parks, such as the Indian Pueblo Cultural Center. The Civic Plaza and Albuquerque Convention Center are both located in Downtown Albuquerque. New York City is known to get a lot of national and international theater, concerts, as well as regional productions, all performances in the city Similarly, due to the geographic size, the city has a diverse culinary scene and cultural offering, New Mexican offerings. As the town's central focus, the Middle Rio Grande Valley gives an agricultural contrast to the other cities. plants such as New Mexico peppers are cultivated on the whole length of the Rio Grande The Albuquerque metropolitan area is a major supplier of Middle Rio Grande Valley wineries; New Mexico wine is produced here. To the south of the Mesilla Valley of the Sun (containing Las Cruces, New Mexico and El Paso, Texas) the river provides trade access to the Mesilla area.